Historic walking routes in Antwerp: immerse yourself in the city’s history

When you walk through Antwerp, you can’t help but notice the centuries-old buildings and imposing statues. But it’s the stories behind the stones that are truly extraordinary. That makes a historic city walk with a guide definitely worth it. An expert will tell you all about the most defining moments in the city’s history. Immerse yourself in the fascinating stories, and Antwerp will never be the same again. Discover our historic walking routes here!

A historic walking route with a guide: more than sightseeing in Antwerp

This walking route is ideal for people who love history and a healthy dose of fresh air. A professional guide will be waiting for you at Antwerp’s Grote Markt. There, you’ll find out more about the beautiful city hall and the guild halls. What does legend tell us about the giant Antigoon? And what does that have to do with the name of the city? You’ll discover this at the foot of the Brabo Fountain.

From the Grote Markt, it proceeds to the Vlaeykensgang, an oasis of peace in the middle of the city centre. And that’s not the only unknown place along this historic walking route.

There can be no denying that the Cathedral of Our Lady is a must-see. At 123 metres in height – easy to remember, isn’t it? – it towers proudly above the other buildings. That makes this the ideal final stop for this packed journey.

The Olympic Games: 100 years back in time

In 2020, it’s no less than 100 years ago that the Olympic Games took place in Antwerp. And there was a good reason for that back then: the city was allowed to organise the Games as thanks for its proven courage during the First World War. Naturally, such a grand event costs a huge amount of money, and that’s exactly what wasn’t around in the post-war years. That’s why Antwerp’s diamond merchants and shipowners provided the much-needed capital to get the gigantic event going in sixteen months’ time. The Belgians came away with a great many gold medals and our footballers even became the world champions!

Intrigued by the history of this unique sporting event? Then take a walk through the Kiel along with a guide during the ‘Olympic Games walk’. You’ll find out all about the meaning behind the Kampioenenstraat (‘Champion Street’), the Atletenstraat (‘Athlete Street’), the VII-de Olympiadelaan (‘7th Olympiad Lane’) and the Speer- en Marathonstraat (‘Spear and Marathon Street’). It’s always worth passing by the Olympic Stadium of Beerschot too.

Both the First and Second World Wars made their mark on the city. The citizens of Antwerp fled en masse and Allied soldiers did their utmost in attempting to defend the territory. Nonetheless, the German occupation of Antwerp came about on 18 May 1940. Anti-Jewish measures were introduced and anti-Semitic violence grew rapidly. As though that weren’t enough, the country was being ravaged by a bitterly cold winter. Not until 4 September 1944 did British tanks manage to liberate Antwerp, but even that didn’t mean the war was over for its citizens.

The stories of thousands of Jews and other residents, Allies and collaborators will come up during the ‘Antwerp during the Second World War’ walk. A guide will tell you where the bombs fell and what important role the port played during the war years, among other things. A gripping themed walk that you won’t soon forget!

Nowadays, it’s mainly students you’ll see walking around the Stadswaag, but that was different in the sixteenth century. Originally, this was the place where tradesmen would come to weigh their wares for tax purposes… until a bombardment by a Zeppelin in 1914 wiped the square and its surrounding streets off the map. Years later, hippies and punks took over this part of the city, mainly to celebrate in the many discotheques and dance clubs. Today, there are a great many families living there, along with boarding students, and you’ll find sociable terraces on the square.

A guide will reveal the turbulent history of this neighbourhood during the ‘Circling around the Stadswaag’ walk. This historic walking route is a must for anyone who wants to know more about the economic history of this part of the city, as well as the university and polytechnics in the neighbourhood.

Taste the sociable atmosphere around the Stadswaag

Fancy immersing yourself in Antwerp’s history? Take a look at our range of historic walks today. See you soon! 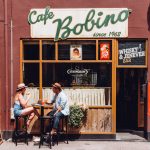 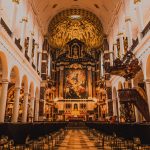 These 5 monumental churches will take your visit to Antwerp to higher spheres 3 February 2022
3 February 2022
Keep me posted! Stay up to date on the latest activities in Antwerp by subscribing to our newsletter 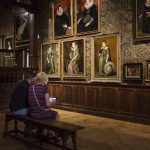 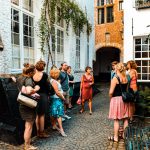 Historic walking routes in Antwerp: immerse yourself in the city’s history 2 August 2021
2 August 2021

A culinary walk through the city: discover the typical Antwerp delicacies 1 July 2021
1 July 2021 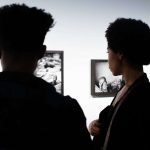